I can always count on my family to do something a little “un-traditional” for the holidays.  I really don’t think that ham is too far of a stretch from the traditional Turkey Thanksgiving meal.  In fact, compared to the Vietnamese food we ate last year for Christmas, I think that ham is very traditional!   My family likes Turkey, but Ham is our favorite holiday meat.   That is why we picked up a Sam’s Castlewood Boneless Spiral Cut Ham from Sam’s Club to enjoy for our Thanksgiving meal! I was in charge of the ham this year.  I like to put maraschino cherries and pineapples on the ham right before baking.  I always take them off when it comes time to put on the glaze, and then I garnish the plate with the roasted fruits along with the sliced ham.  It is SO good!   I also reserve the pineapple juice from the pineapple can and use it to mix with the glaze. The glaze from the Castlewood Ham was so good!  It went right on and coated the ham with the most aromatic sweet flavor.   Since I mixed it with the pineapple juice (in lieu of water)  it was even better!   Once it was baked it had a nice caramelized crunch to it too. Everyone was waiting to dig in once I sliced it up!   It was so easy to slice up and the spiral slices were the perfect thickness. My dad always prays before the meal and then my mom yells for everyone to come in and make a plate. Here is my plate!  As you can see we had mashed potatoes, green bean casserole, Castlewood Spiral Sliced Ham, pineapples, cherries,  sweet potatoes, corn casserole and rolls.  (We also had dressing too which I got later on.) This ham is SOOO good!   It’s a perfect salty, smoky, and  sweet ham to serve up at any holiday gathering!

It also makes great leftovers!   I made ham sandwiches with ham and mashed potato soup with our leftover Sam’s Castlewood ham! First, I made some ham stock with some ham bones, scraps of ham rind, onions, carrots and celery.   I cooked it for 6 hours and then refrigerated  it over night.   You could use store bought stock, but I suggest  the homemade version for best taste! Once the stock was refrigerated overnight I scraped off any fat from the top.  Then it was ready to use in the soup. For the Ham and Mashed Potato Soup I added mashed potatoes (from the leftovers, ground ham (from leftovers), onions, cream, and sour cream.    Since the mashed potatoes were already seasoned pretty well it didn’t need much added to it. The taste was wonderful!  The addition of ham really gave it a great flavor.  It was one of the best potato soups I have ever made! 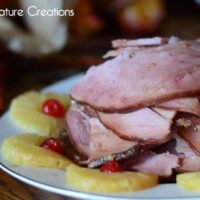 I served ham sandwiches along with the soup.  They were perfect together! I made the sandwiches with my Sweet BBQ Mustard Sauce.  I know it sounds strange, but it is SO good!   I have two versions of this and I will share this one with you today! I put the sauce on both sides of some leftover rolls and then built my sandwich.  I added lettuce and the leftover Castlewood ham and it was complete! This was so yummy!   I have to admit that while I was preparing all these dishes I was sneaking in bites of the ham the whole time!   Good thing I bought one big enough for leftovers! 😉

“I am a member of the Collective Bias®  Social Fabric® Community.  This shop has been compensated as part of a social shopper insights study for Collective Bias™ and Castle Wood #CBias #SocialFabric   All opinions are my own!”

[…] Leftover Ham and Mashed Potato Soup from Sprinkle Some Fun […]

Sounds fabulous! I am hoping to make some ham & cheese soup this week!

That sounds really good too! :)

All those dishes looks so yummy. Now I want a ham sandwich. LOL. Thanks for sharing all the great recipes. I am definitely trying that ham potato soup