I’ve been obsessed with rainbows since I was a little girl, but then again I think every girl growing up in the 80’s was too.  Carebear stare anyone?  That’s why I get so excited around this time of year with all the rainbow themed St. Patrick’s recipes and crafts.   This Rainbow Potato Salad is super fun and healthy!  I gave it a southwest flavor which tastes amazing with the avocados and purple potatoes! Have you ever tried purple potatoes?  I think they taste just like the white ones, but even better in my opinion.  I love the texture and slight sweetness over the white ones. (affiliate link) and it’s not only beautiful but flavorful too! 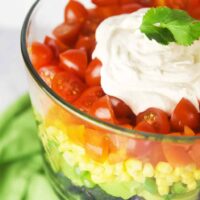 Here is what it looks like after mixing it up!  This would make a great potluck or party side.  Especially for a rainbow party!