Thank you COOL WHIP for sponsoring this post. Join us on Facebook for inspiration and recipes for everyday treats. What you add makes it. #coolwhipmoms Last week we headed to Cedar Lake in the Oauchita Mountains to go camping for a few days.  It was so much fun!  My extended family goes every year and has a family reunion on top of all the camping adventures.  I was able to get pretty creative with camp cooking because my grandparents gave us their portable grill this year!  One of my favorite treats to eat is pie and my favorite kind of pie always has the word cream in it: Banana Cream, Chocolate Cream, Coconut Cream… well you get the point!

One of the best and easiest ways to make a cream pie is with pudding and COOL WHIP Whipped Topping.   The creaminess of the COOL WHIP makes the pudding go from good to great!   I came up with these Mocha Cream Pies and my family could not stop raving about it!  It was a great hit and  can be made on the grill on the top rack or in the oven! To start off I used a pre-made pie dough and used the top of the COOL WHIP container to cut with.  This worked perfectly with the tart pans that I used for these pies.  I wanted the pies to be smaller in size so they would cook up faster and easier on the grill.  You can make these in tart pans or just make a large one- it’s up to you!

Cooking these on the grill is easy.  I used the top rack so that they would cook more evenly.  I just watched them carefully and took them out as soon as they started browning a little bit on the sides.  If baking these you will want to do the same.  It takes about 10 minutes to make on the grill or bake. While they were cooking I mixed up the pudding which was just 6 packages of pre-made chocolate pudding and 3/4 cup of COOL WHIP. Next I added a couple of Tablespoons of Instant Coffee.  This made a great Mocha Flavor that everyone enjoyed.

Once the pie crust was cool I added the pudding and COOL WHIP mixture inside. Then I drizzled on some melted chocolate on top. Next came just a dollop of COOL WHIP to the top of each pie.  Just perfect!   What a wonderful treat! Don’t they look pretty?  I hope you enjoy these as much as I did! 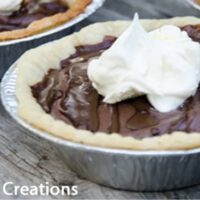 Sponsored posts are purely editorial content that we are pleased to have presented by a participating sponsor. Advertisers do not produce the content. I was compensated for this post as a member of Clever Girls Collective, but the content is all my own.

“I’m partying at the Pi Day Pie Party at Crazy for Crust today. Come party with us!”