This shop has been compensated by Collective Bias, Inc. and its advertiser. All opinions are mine alone.  #GameTimeHero #CollectiveBias I can’t believe it’s already football season again!  It’s always exciting to watch the games with a few friends and eat some football party foods.  I am always looking for easy foods to serve and Walmart has a great selection of  Tyson Wings that are already prepared at their Deli.  I love that I can just easily pick them up and bring them to any football gathering whether it’s in the parking lot at a game or at home .  I also like using the wings as ingredients for other recipes too.  These General Tso’s Chicken Sliders were delicious and easy to make with the Tyson Deli Wings!

For my recent game time spread I picked up a pound of Tyson General Tso’s Boneless Chicken Wings and 1 Pound of the Tyson Bone-in Hot Wings from the Walmart deli.  These wings are great quality and very affordable.  They can be purchased in a Pick 3 Bucket, a plated meal, or wings by the pound.I was able to quickly put together the General Tso’s Chicken Sliders with the already prepared General Tso’s Wings.  Everyone loved them and I was happy that I didn’t have to cook anything! Next mix up the ingredients for the Sesame Ramen Slaw that will go on top of the chicken.  I just mixed up crushed ramen noodles,  broccoli slaw mix, Kraft Cream Italian dressing and Kraft Asian Sesame dressing. Then just put all the ingredients on a bun and you have some yummy General Tso’s Chicken Sliders!!!

I also served these Hot Wings that were from the Walmart Deli with some Kraft Ranch dressing.  They were so good! I know we are going to have some awesome tailgating parties this football season and I am glad I can buy already prepared wings at the Walmart deli to save time and money!  Want to try them out for yourself?  There will be in-store demos happening soon from August 29th-31st, 2014 at participating stores which you can find in this document.  Happy Football Season! 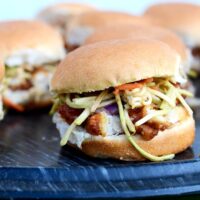 Rachel is the creator of, Sprinkle Some Fun, a site dedicated to fun recipes, crafts and other ideas that bring families together. She enjoys undisclosed amounts of coffee, reading scriptures, long talks with her husband and watching her five kids grow up.